Evaluation and Satisfaction Questionnaires were sent out to a random sample of 50 clients who completed treatment with a psychologist at the clinic during 2019. The questionnaire consisted of six questions:

In addition, clients were invited to add any comments regarding the service they had received.

Each question received a response of either Strongly Agree, Agree, Undecided, Disagree or Strongly Disagree.

For the purpose of the presentation and organisation of the data, the responses have been rated from 1 to 5, where 1 = Strongly Disagree and 5 = Strongly Agree. 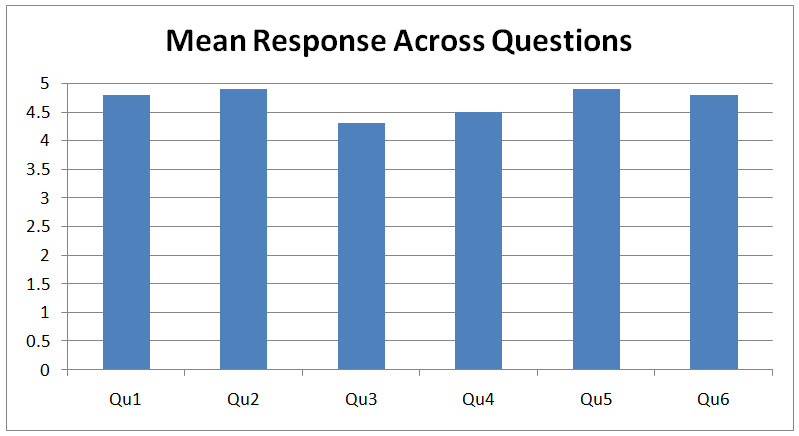 Questions 2 and 5 received a mean response of 4.9. With regards to Qu2, the overall consensus was that clients felt comfortable talking to their psychologist and able to build a relationship with them which consisted of a high level of trust. One client reported: "I have total faith in [the therapist] and the coping strategies he has given me," while another described feeling they were able to "speak openly without having to hold back." Words such as "friendly" and "approachable" were also used when describing how the client felt talking to their psychologist.

With regards to Question 5, clients reported that they felt the psychologist was "competent" and "professional". One client described the "knowledge, calmness, wisdom and general expertise" of their therapist as being"both supportive and uplifting." Another client referenced their "superb psychologist" who "understands [their] condition."

Overall, 100% of clients reported a positive experience, with the majority of clients being particularly impressed with the psychologist they were treated by, recording a notable improvement in the difficulties which they were referred for.